The complexity of the reconstruction of the eastern style in a modern interior consists basically of only one problem: oriental interior design is not only art but the philosophy of life. Japanese style is on top of that the most mysterious. Nevermind, if you like the culture of the country of the rising sun, nothing hampers to create at least the atmosphere of Japan at your own home. Read our article if want to know how to do it. 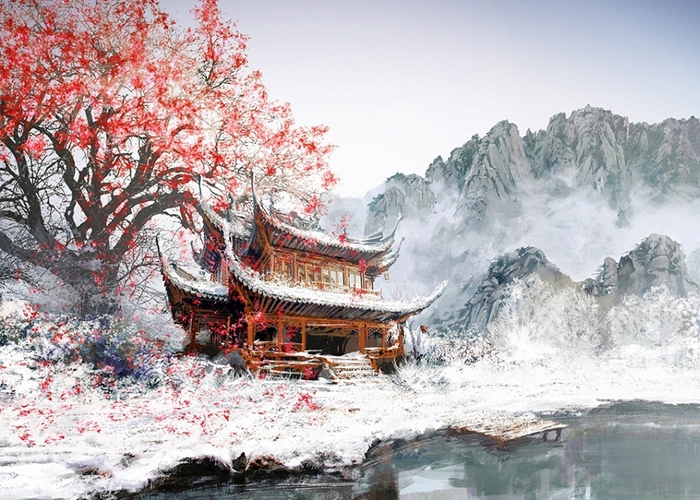 Japanese style began to gain popularity in Europe and the United States relatively recently - from the middle of XIX century. Until that time, the concept of "Japanese-style" interior design was slightly more than a phantom, because first trophies of travelers and traders were nothing more than souvenirs brought back from the Land of the Rising Sun: silk kimonos, fans, weapons, statues, wall screens, spices. 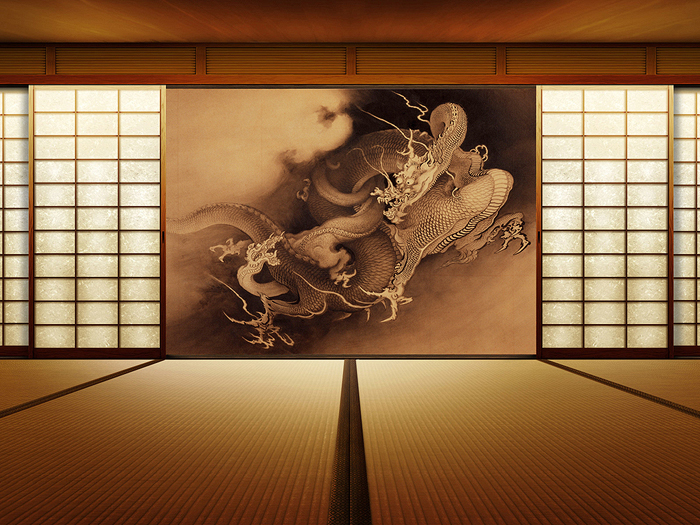 Some real interest in the study of Japanese art and interior design in particular, appeared only in the 30-ies of the XIX century. Later, during the reconsideration of cultural values, many artists from the Europe and the United States being in search of new sources of inspiration commenced to take advantage of Japanese motifs, and the European way of life began to get some new elements of Japanese interior. 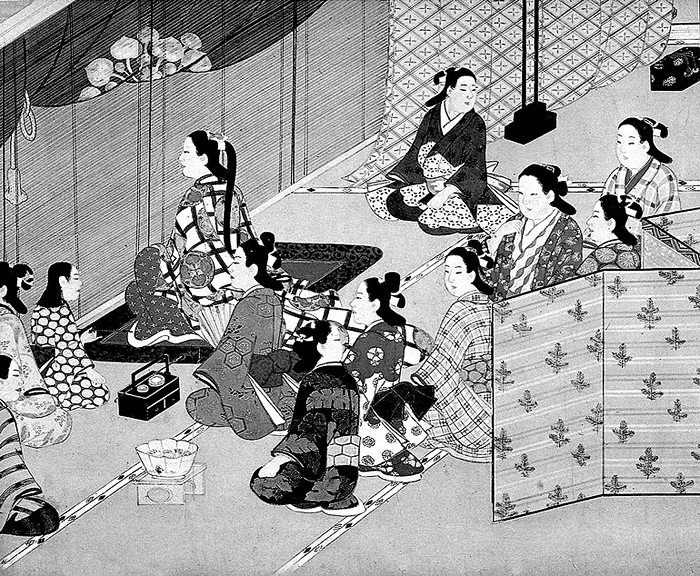 Today "Japonisme" is one of the most popular ethnic styles. It is characterized by the absence of decorative frills, special refinement and philosophy.

People accustomed to life in a traditional European interior will experience extreme difficulties to immediately regroup and begin to "live on the floor." The reason is that the objects and furniture in Japanese interior are arranged to be convenient to use only in the sitting or even squatting position. 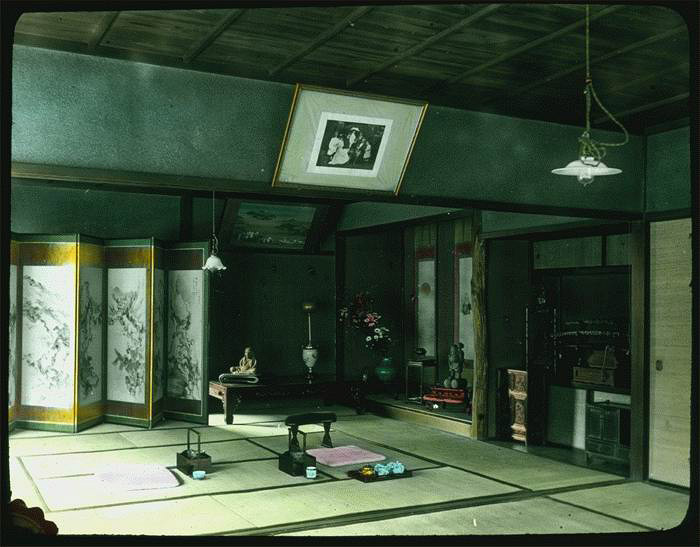 After all, Japanese interior adopts the idea of exceptional practicality: the place is meant to be as much as necessary in order to sleep, to relax, to cook and to eat - no more and no less. 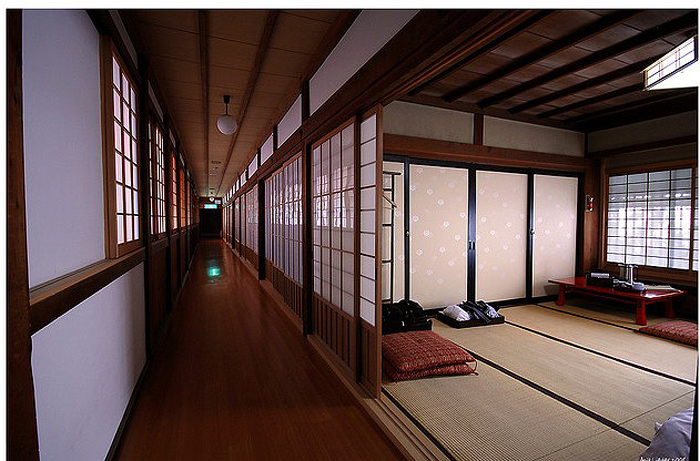 A small amount of furniture, natural fabrics, not textured surfaces and game of shades (according to the Japanese worldview, bright daylight distracts and prevents to understand and to appreciate the beauty of the ambiance). 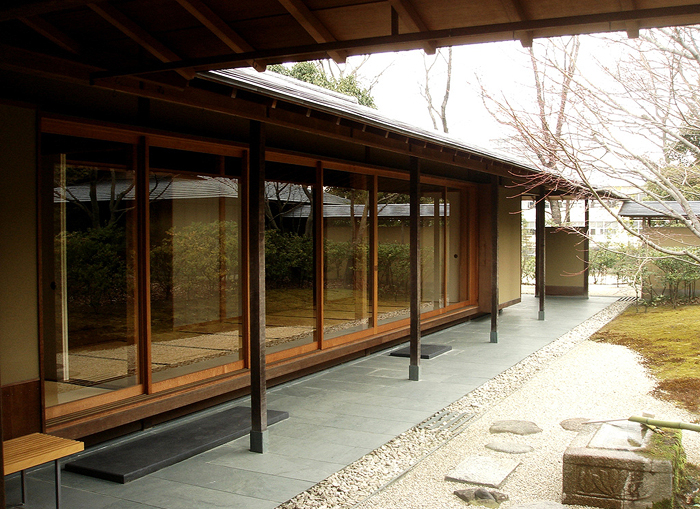 Japanese interior involves the space zoning not on rooms but by functional areas that are separated by semi-transparent screens – “fugusuma”, as well as by different floor levels. 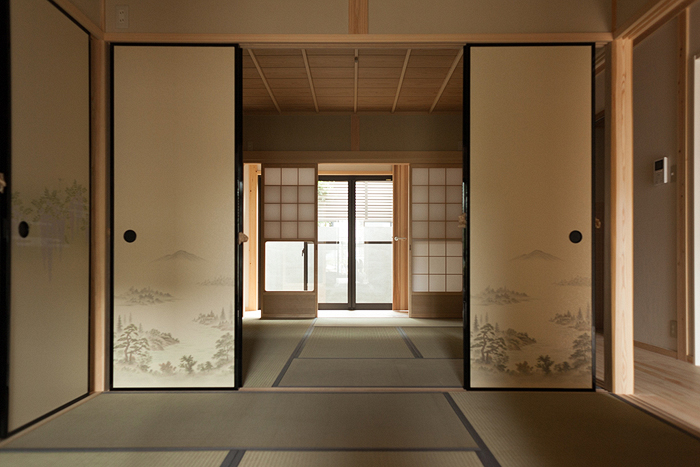 Thus, when a portion of the space can be easily separated for a particular purpose, you can feel yourselves quite comfortable in small and even tiny spaces. 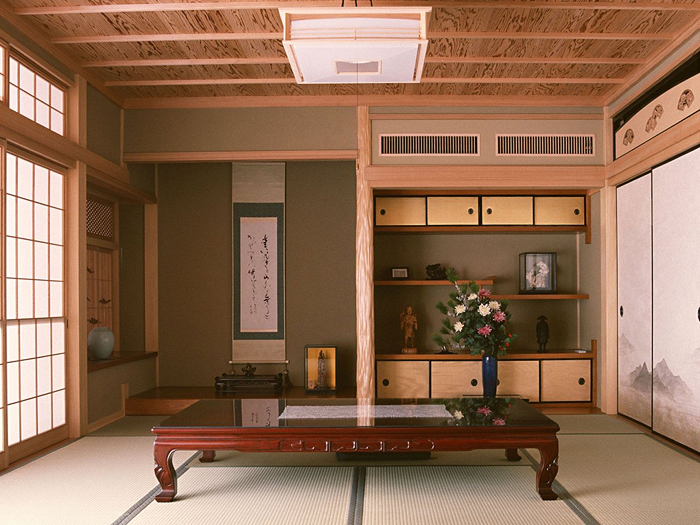 By the way, it is oddly enough, but niches and podiums derived to the European design from the Japanese style "space zoning" and the need to "hide" occasional or unnecessary objects from prying eyes. 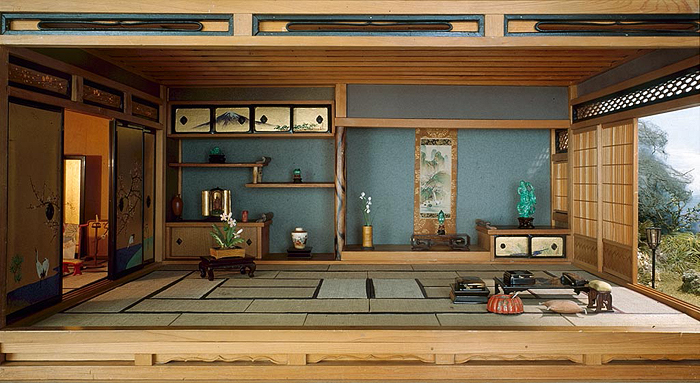 This is a basic rule of construction of the Japanese space concept where "nothing is superfluous or accidental".

The color scheme of Japanese interior 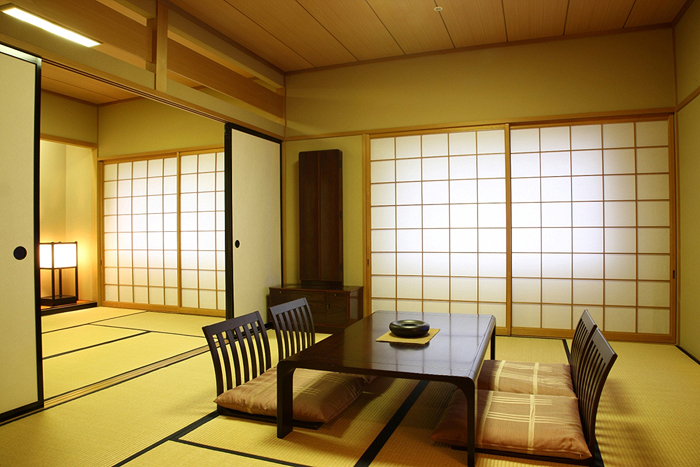 In order to let the "yin and yang" philosophy rule in the interior, contrast colored objects: black, red, cherry, pink, brown and white are present. 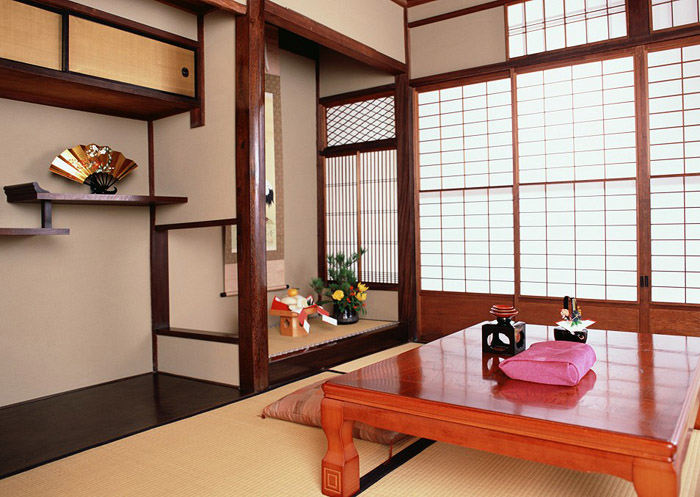 Walls, floors and ceiling in the Japanese style

As we mentioned above, the wall screens in the Japanese interior are translucent diaphragms of rice paper in light shades. The spectrum of solid walls is also sustained in matte pastel colors, as the walls are decorated exclusively with natural materials: rice paper, cork, veneer, bamboo, rattan. 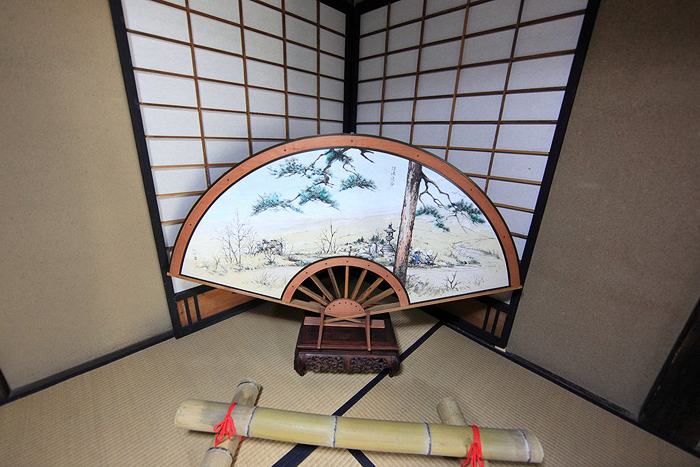 The floor finish in the Japanese style is made also from natural materials only. Wood flooring is found in the kitchen and corridors, all the rest of the space is covered by tatami. 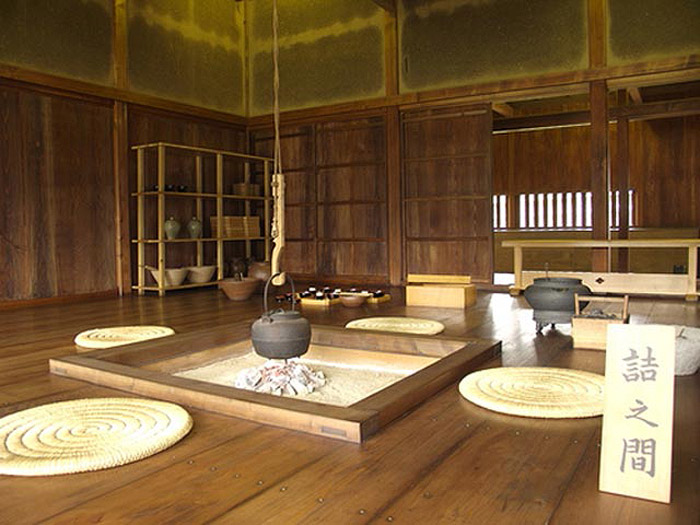 The traditional Japanese interior is not focused on the ceiling, though designers pay more attention to it in its modern interpretation. 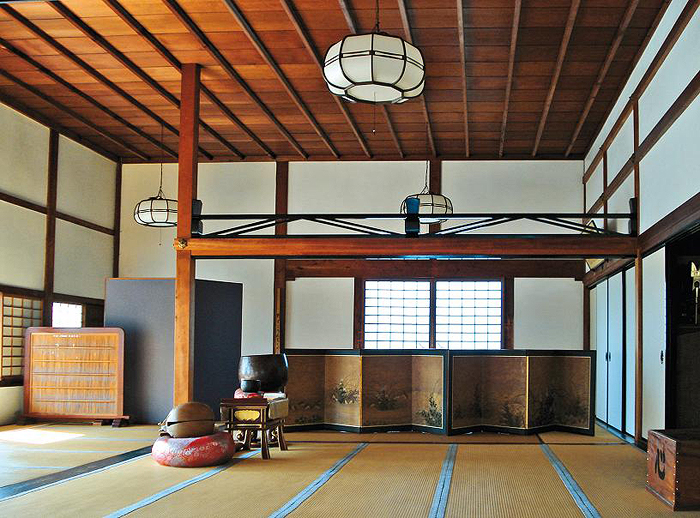 Despite the modesty of colors, Japanese interiors cannot be called boring - the walls and floors are just playing their role of a contrasting background for furniture, decorations and engravings. 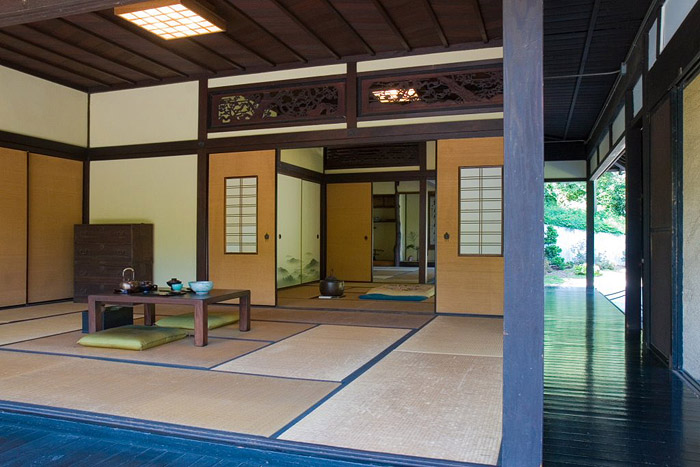 From the other side, if there is no way to decorate the interior by pure eco materials – there is a lot of imitating substitutes on the market. For example, the walls can be decorated by stretch matte canvas that can easily imitate a rice paper.