Gothic has become an internationally acknowledged epithet symbolizing all tapering and extended. It's influence is phenomenal on our nowadays life. Traits of it can be found anywhere beginning from american skyscrapers to middle age tented temples. This style dramatically differs from any other style and able to completely transfigure your home. And we will tell you about this further in the article.

History of the gothic style

Gothic - a period in the middle age art development, embracing almost every field of materialistic culture of Western, Central and partially Eastern European regions, taking place between 12th and 15th centuries. Architecture has always been the leading type of a Gothic style art. The building of city cathedrals that displayed a feeling of lightness, airiness and spirituality has always been it's culmination.

Architectural forms, a tapering arch in particular, that rooted it's origin into arabic culture, started to express a tendency to reach the sky, rather than to display firmness, impregnability and solidity. 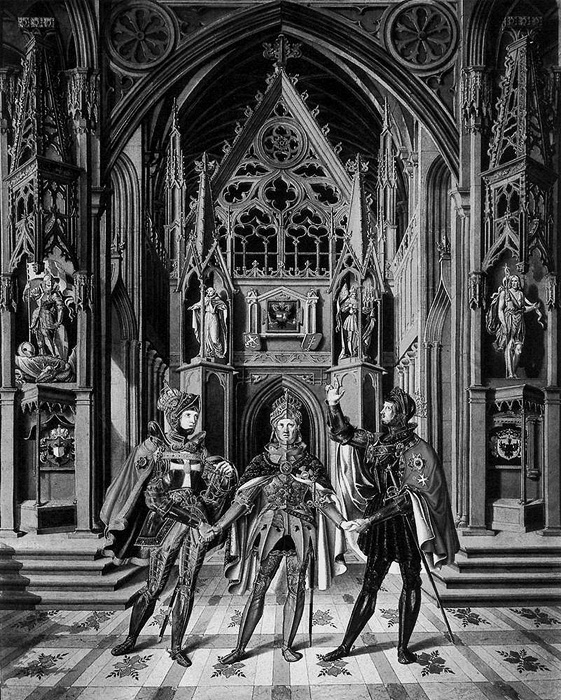 Stained-glass windows of an enormous size substituted the walls and took their place in between supports. That is why all interior space was lit by multicolor natural light.

It is noteworthy that the term "Gothic" was put in use by Italian humanists, for indication of everything that did not belong to classic or antique and, in their opinion, depicted barbarian and ugly (from Italian "gothic or barbarian manner", named after german tribes).

There is no way you can mix this style with any other. A Gothic Style interior is always reaching the highest point. It's detailing is mystically imposing, being light and airy at the same time, complimented by filigree ornamental and carving work. It sometimes may reach fantastic forms. 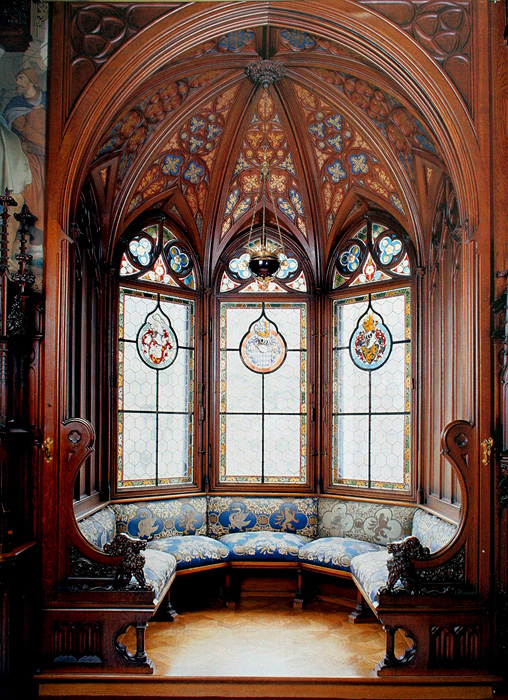 A unique character of Gothic Style creates colorful stained-glass windows of an immense size, tapering ceiling vaults and tall wooden furniture. There is no surprise that this style represents middle age charisma, fearless knights and castles they protected. 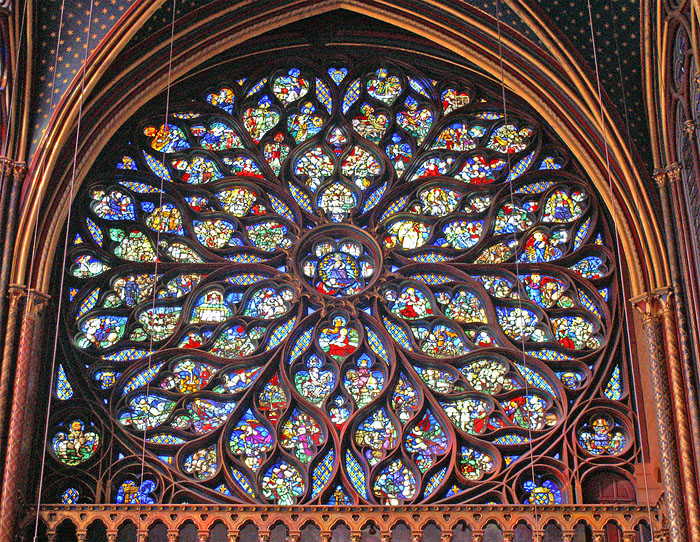 Reproduction of Gothic Style in an interior is not an easy task. First of all because of complicated forms and shapes along with it's requirements for a large space. Adding some traits of Gothic Style character into an existing interior is our goal.

The brightest and the most saturated colors: red, olive, all shades of purple, yellow, raspberry, brown, deep blue, green were used for contrast details and stained-glass windows in Gothic Style. Silver and golden threads were used to add splendor in detailing. 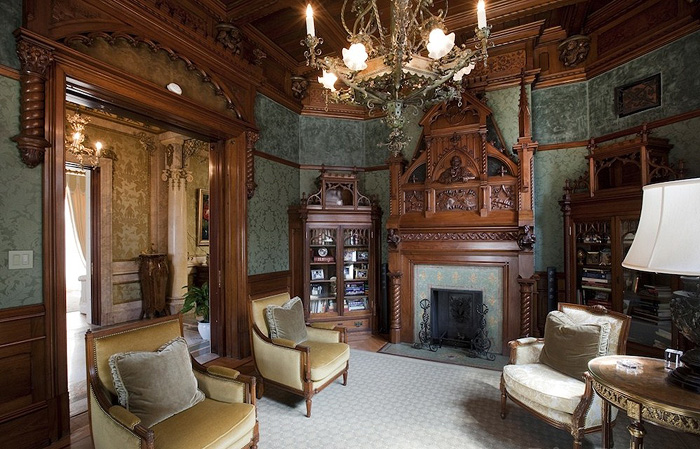 There is a logical explanation for such a bright and saturated color palette. A middle age interior was dull, grey and cold, depicting mystical longing for the dark and unseen side of that time human living, which possessed it's own distinctive style and character. There were exceptions like some small rooms had their main background color in white or elephant ivory, while decorative elements were stone grey or dark brown hardwood.

Gothic style furniture is quite simple by nature and runs its roots into cathedrals and churches. Every piece is longing upwards and repeats window and ceiling vault forms of castles and churches of the epoch. Beds have vault headboards as well, chairs have tapering apertures in the backs, massive double-door wardrobes resemble castle gate entrances. 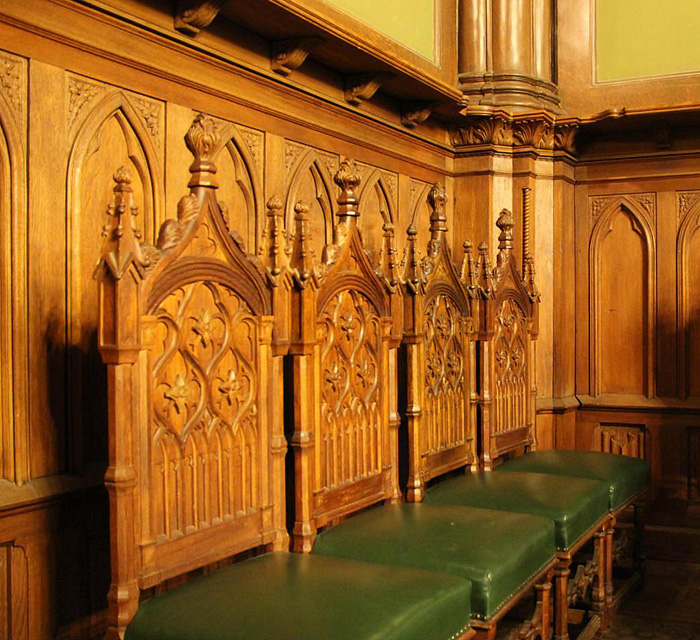 The major material for the furniture was hardwood and metal, that is why forged metal furniture became popular. Despite it's simple straight lines the detailing is fabulous. It was decorated by skillful carving, lacy floral and geometrical patterns. Forged elements were masterfully executed and made the furniture look lightweight and at the same time massive and solid, practically unmovable. 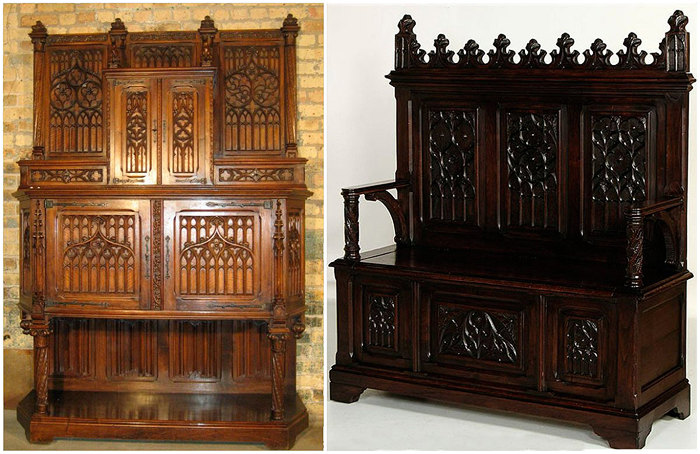 Almost every piece of furniture has an ecclesiastical history, that means all of them originate from church: benches, chests, wardrobes, chairs, sideboards on tall stands, canopy beds. Furniture color matched the walls - dark-grey, dark-brown, black, though, the upholstery was bright and contrast.

Floor and walls in the Gothic Style interior

Marble, stone, wood:pine, oak, larch, cedar, juniper were the major materials for the interior of middle centuries. The floor could only be made out of stone or hardwood for that reason. 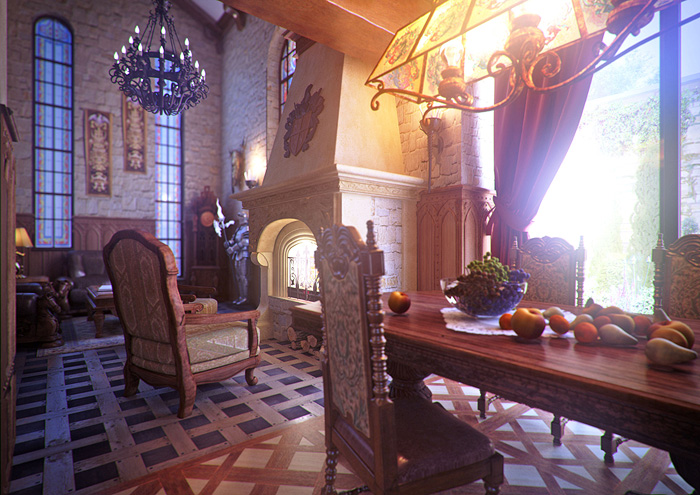 The wood must be firm, be cut in wide planks and of dark tone types. The walls were far from being an important element, they were decorated mostly by large windows. The rest was plastered, but a later into the epoch zones above fire places were decorated by a filigree curved or painted oak panels.

As it was mentioned, large tapering windows were a significant part of Gothic Style. The creation of an uplifting environment was based on this element. It passed through just enough natural light to create the proper ambience. 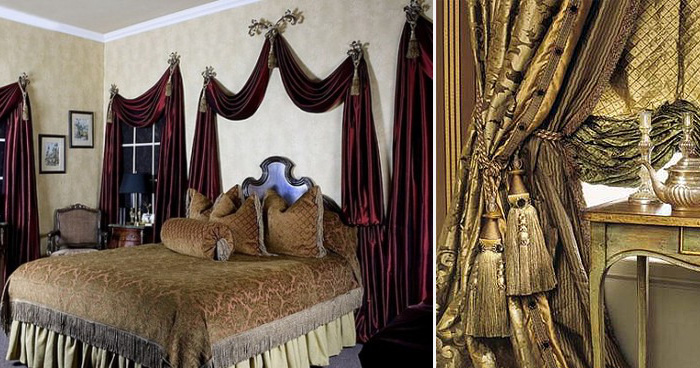 There were no window draperies or curtains. Only, rarely, you could find long heavy curtains from the very floor to the very ceiling. They would balance lightness of windows and freedom of sunlight to intensify a mysterious and mystical ambience. 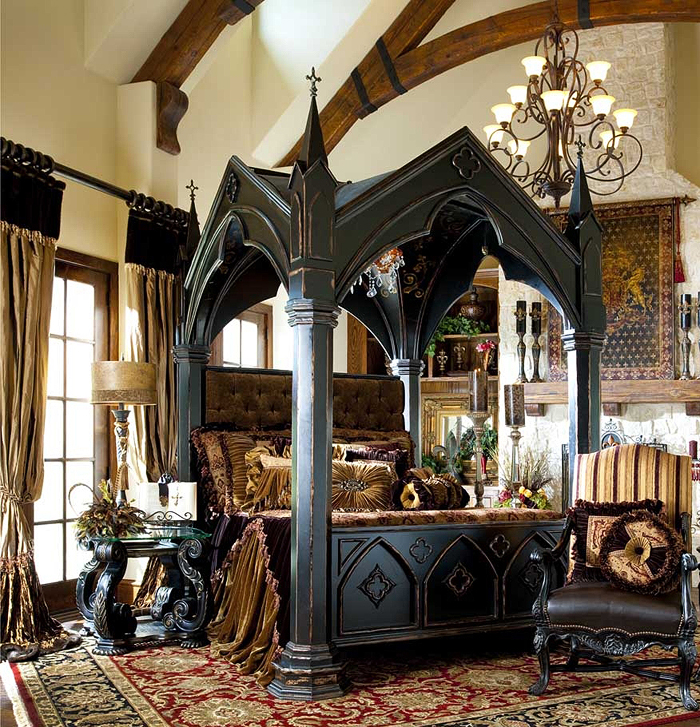 Carpets and rugs would go on the wooden and stone floors, colorful tapestries on the walls to create a cozy and warm atmosphere. The textile should carry geometrical patterns or a heraldic symbol. 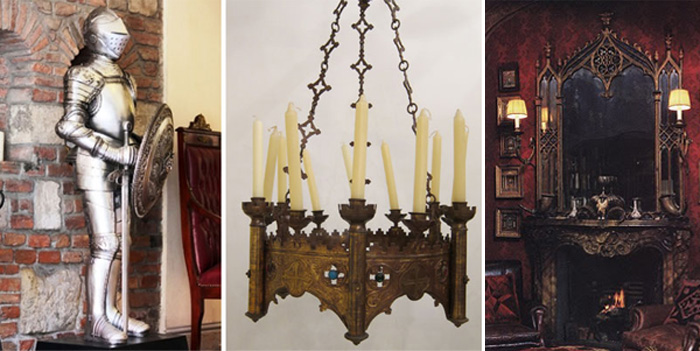 Metal kitchenware and decor elements is another important style attribute. Even today crafted metal candleholders and cups will look splendid on wooden shelves or a fireplace. 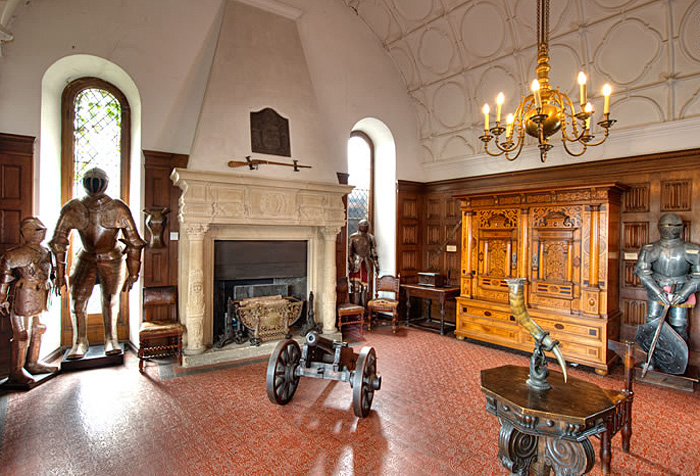 Forged chandeliers would be a preference in choosing a lighting fixture, as well as placing lots of candles in the interior. There were no artwork decorating the walls at those times, easel-painting, bright stained-glass or tapestries took their place.

Ceiling in the Gothic Style interior

The vault shape of the ceiling was the basic element in a constructing of any building in Gothic epoch. Firm frame and multiple columns made the construction lighter and let architects to widen the space, make it airier by removing almost all internal dividers and walls. 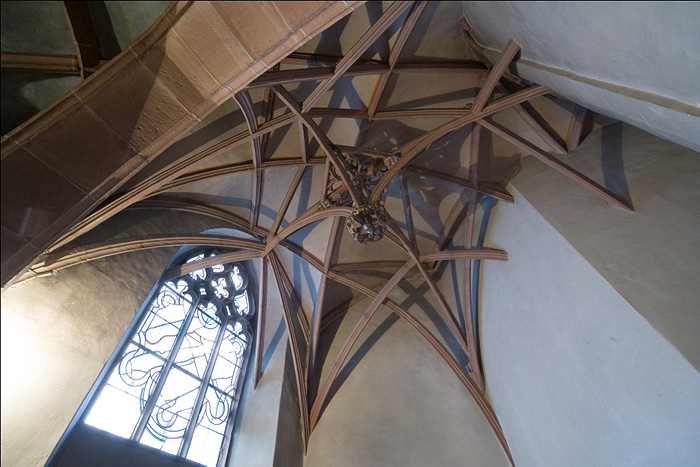 High ceilings added grandeur, extravagant plaster moldings marked exquisiteness. It is a challenge for designers and architects to recreate a ceiling in a gothic style in a contemporary building. The sharpness and grandeur of the vault, the overall ceiling height, the exquisiteness of detailing are three major challenges on the way. 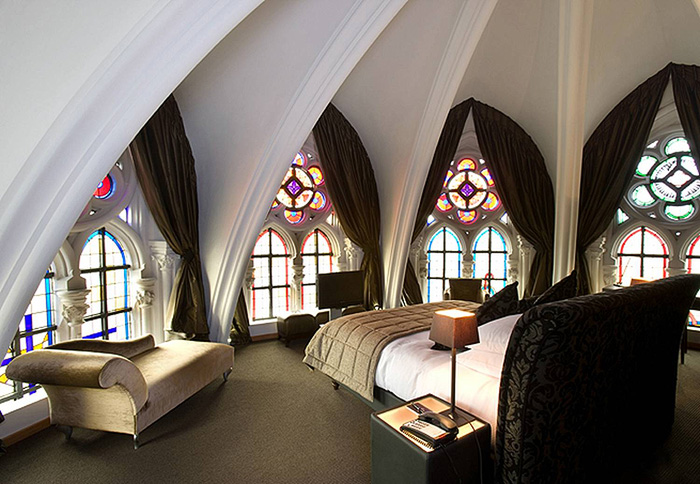 Printable stretch ceilings system offered by NYCeiling, Inc, can be the best way out in achieving the goal.

There are 2 variants possible:

Now you know a few recommendations on how to make a gothic style presence in your interior. If you do not want to wait any longer and ready to start the changes, contact us today. NYCeiling team will help you to achieve the best results.